Realme Refrigerators : Get a discount on taking it now

Realme recently introduced Air Conditioners (AC) and Washing Machines in India. Now it is expanding the portfolio further. Realme has introduced single and double door refrigerators in the country. 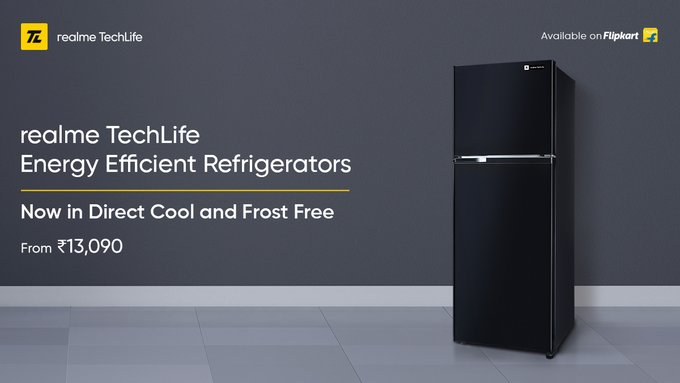 Features and Specifications of Realme Refrigerators

Realme has launched these fridges in single and double variants. Both the variants come with multiple storage variants. The single door variant is offered with 195L and 215L with 2-star and 3-star rating options.

Also Read – Samsung Galaxy S22 has now been launched in a new color. Know the price and features

While the double door variant has offered with 260L, 280L, 308L and 338L capacities. It has launched in Black Uniglass and Premium Finish. Copper capillaries have given in both the variants, due to which the temperature of the freezer can be down to about -23 degrees. It offers stabilizer-free operation

With this, the internal temperature is controll by looking at the outside temperature. Large 12L vegetable storage has given in single door. These come with spill-proof glass shelves. Ice Twister and Collector have supported in the double door model. It supports 360-degree uniform cooling. It has dedicated storage space and accessories. Refrigerators has given a smart deodorizer, about which the company claims that it does not smell inside the fridge. R600A has also supported in the new Reality fridge. It is eco-friendly and consumes less energy.

The Realme refrigerator can purchased at an initial price of Rs 12,490. However, as an offer, these fridges are being sold with a discount. All models can purchased through the e-commerce site Flipkart.

Also Read – The release date of Taapsee Pannu film Dobaaraa is out. This film will be released in cinemas on August 19.